Lori Zimmer takes a first look at Arcane Archetypes, the latest exhibition by Beau Stanton, taking place in a Chelsea Tattoo Parlour. So what exactly is the relationship between the container and the contained?

The sterile white presentation box, known as the traditional art gallery, has been taking second stage lately, as exhibitions have been opting for alternative venues: derelict doctors offices, thriving hotels and even steampunk tattoo parlours. While the white box gives the art its full attention, these “alternative” spaces add another facet of personality into the mix, infusing their own history in with the exhibited art’s message.

If the white box is a blank canvas (arguably — see Brian O’Doherty’s White Cube essays for a brilliant analysis of the issues), these alternative spaces are mixed media, rife with pre–existing textures, uneven surfaces and weathered qualities that can either work with, or against the art that is coupled with it. But when done right, these venues create a more experiential exhibition for the visitor, adding an imaginative narrative layer to the process of art–viewing.

Artist Beau Stanton, who’s work has previously featured on Artfetch, has taken the alternative space plunge, debuting his latest solo exhibition, Arcane Archetypes, at tattoo parlour–cum–art gallery, Chelsea’s Last Rites Gallery. His signature imagery: of beautifully forgotten architecture, with a Victorian influence, has been fused with a specific theme: the heady imagery of the Tarot card. Stanton has taken on the challenging endeavour of interpreting a widely recognizable and iconic set of imagery, a task that many artists avoid in order not to draw comparisons with all the others who have gone before…

Undaunted, this new body of work weaves the language of alchemy, Freemasonry and Ancient Mysticism as a modern interpretation of the Tarot set. Stanton attacks and addresses each card, infusing new symbology into each. The Magus, or magician card, is reinterpreted as Da Vinci’s Vitruvian Man, splayed between the Freemason’s compass and a frame of sword and branch; the artist’s signature letterpress patterns tying the symbols together.

Rather than a goddess or saint, the World card is represented by a tree, or Mother Nature, blooming over a pair of open hands. In this piece, Stanton places ownership of the world and its problems onto the hands of man, rather than the hand of god. The painting places responsibility for the world’s current issues onto man, including global warming or environmental destruction, symbolized by the tree. Even The Fool feels recognizable, his open musculature reminiscent of childhood Invisible Man models or the grotesque BODIES exhibition that has seemed to pop up in every major city. The exposed man, instead of a jester, hovers on a cliff’s edge, with the comforting familiarity of the blurred scene behind the Mona Lisa at his back.

Tying the familiar together, Stanton’s work feels at home in the overly ornate confines of Last Rites, which boasts ornately Gothic faux–architecture, complete with stained glass, buttressed walls and crypt–like entrances. Some may feel that this juxtaposition of art with clearly fake architecture could be perceived as ungenuine or lacking taste, but instead the two play off each other in a way that sparks the imagination. The ornate interior leads seamlessly to the gallery portion of the venue, which is more sparse in order to not completely distract from the hanging art. The subtle details, like a Gothic church pew rather than a gallery bench, creates a dialogue between the art and the setting, without overstepping boundaries. Spending time with an exhibition inside Last Rites feels more like an exploration adventure, inviting each visitor to create inner narratives between the décor and the art. Is this a new way of seeing, or just an opportunistic quirk exploiting a particular collision of fashion and taste? Only time will tell. 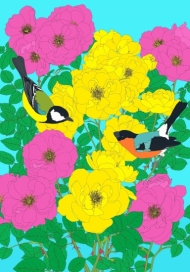 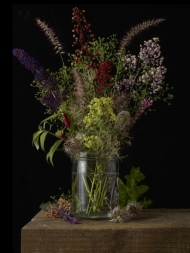 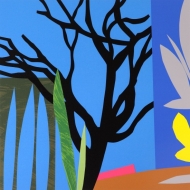 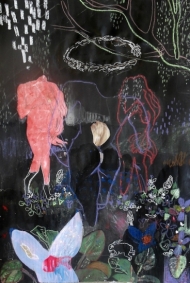 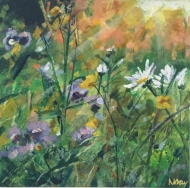